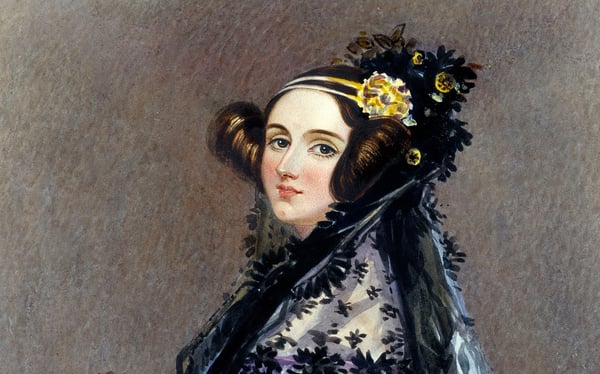 Is Ada Lovelace our first tech visionary? In many ways, she anticipated our Digital Age (in Victorian times!) and is certainly a celebrated role model for women in technology.

In an article published in 1843, she imagined a future in which programmable machines would be essential to scientific progress, and might even be used to create art and music.

Ada, the abandoned daughter of the romantic poet, Lord Byron, was put under a strict regime of moral and mathematical training by her mother who hoped it would counter any dangerous "poetical" tendencies she might have inherited from her notorious father.

In 1833, age 17, Ada was introduced to Charles Babbage and one of his innovative calculating machines, the Difference Engine, at a party in his London drawing room. The introduction was made through their mutual friend Mary Somerville which relationship she used to visit Babbage and the machine as often as she could. At 26, married with three small children, she undertook maths correspondence course.

Ada made Babbage a bold proposal. She offered to work as his assistant - a remarkably bold move, especially given the stifling social conventions of the day. It worked!

The only published description of the Analytical Engine was a French article which Ada translated for a British journal, and she added add a set of notes, describing more fully how the Engine worked. These Notes (which included some visionary statements about its potential and limitations) ended up twice as long as the original article.

The Notes also included tables setting out the sequence the machine would have to go through to find the solution to an algebra problem (e.g. Bernouilli's numbers sequence). This is why some writers call Ada the "world's first programmer" but these tables were not strictly computer programmes.

She does, however, seem to have understood the significance of Babbage's engines better than he did. So – although not the forerunner of today's coders and hackers, Ada was probably one of the first visionaries who imagined how future technology might change the world.

It would take another hundred years to recognise the significance of the extra ordinary foresight in her work. Her notes and letters to Babbage make it clear that Ada understood the potential of computers in a way that he, or nobody else ever did.

Ada Lovelace Day is now in its thirteenth year – it’s an international celebration of women working the fields of science, technology, engineering and maths (STEM), which was founded in 2009 by Suw Charman-Anderson and is held annually on the second Tuesday in October.

This year, as well as lots of blogs and social media action, there's a brilliant online talk at 8pm BST with entertaining evening of talks from Prof Sophie Scott, Dr Priti Parikh, Fran Scott, Susan Okereke, Yasmin Ali and Aphra Le Levier-Bennett, with Helen Arney hosting.  Tickets are free and can be booked through eventbrite

women in computing
View all blogs